Forgive the (bad) joke of a title.

I recently purchased a copy of Bob Dylan’s 1970 collection, a three-disc set of alternate tracks and outtakes from his recording sessions for the Self-Portrait and New Morning albums, along with a session featuring George Harrison from 1 May 1970. 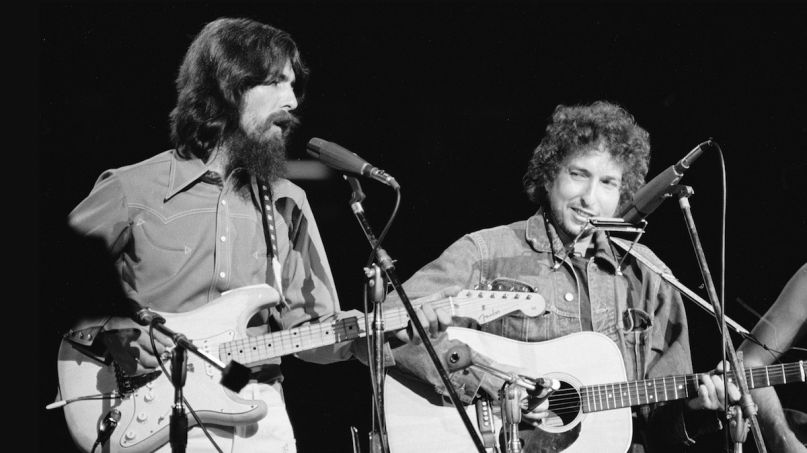 Harrison and Dylan at the Concert for Bangladesh, 1971

Upfront, what you need to know about this set:

Funny side story about that: I was listening to the collection and chatting with my friend Ian at the same time. We talked about the various tracks, our favorites and the ones we weren’t as sold on, and I joked that I was off to listen to the 27th version of “Sign on the Window.” He got a laugh out of that, but as soon as we signed off the chat, a lovely piano-and-voice version of the song came on and I felt kind of bad about complaining. Ah well.

To be fair, there are some standout tracks here: a ripping version of “Matchbox,” three different takes of “Alligator Man” done in three different styles (there’s a ‘rock’ version and a ‘country’ version along with the unleaded one), “Jamaica Farewell,” “Father of Night,” and a handful of takes of “If Not For You,” a song that Harrison himself would cover to better acclaim for All Things Must Pass. Also worth a mention are the takes of Dylan covering himself from his earlier records: alternates of “One Too Many Mornings,” “Gates of Eden,” “It Ain’t Me Babe,” and “Rainy Day Women #12 & 35” show up here, but are almost curios and don’t offer much more insight into the songs themselves.

Then again, it does rather feel like we’re merely a few years from getting official recordings of Dylan’s answering machine.

Overall, 1970 is a decent collection, and bargain priced at less than $20 USD. For the casual fan, it’s probably something you can skip, or perhaps buy on a track-by-track basis for certain songs. For die-hard collectors or fans of Dylan’s albums from 1970, it’s worth picking up.